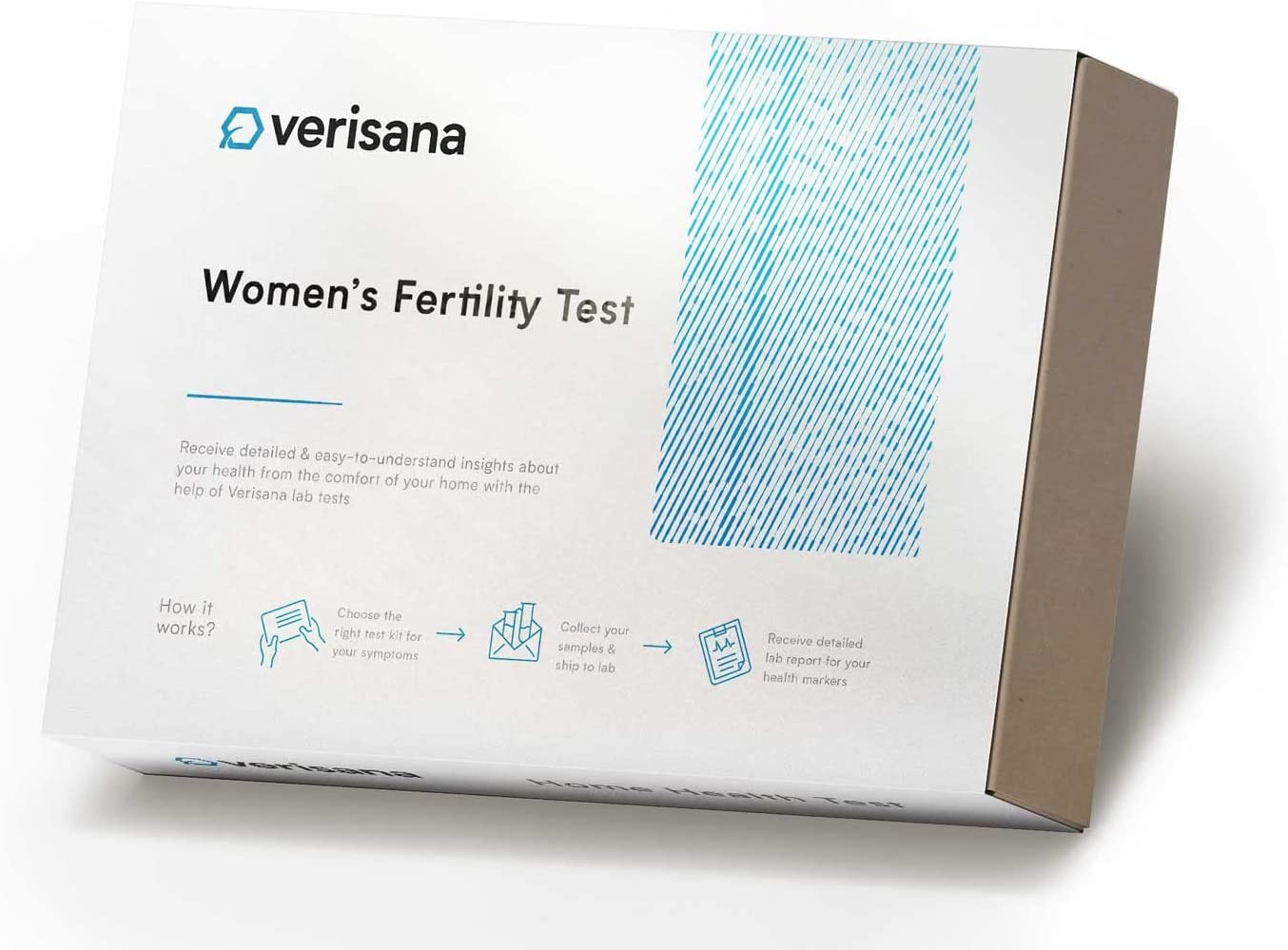 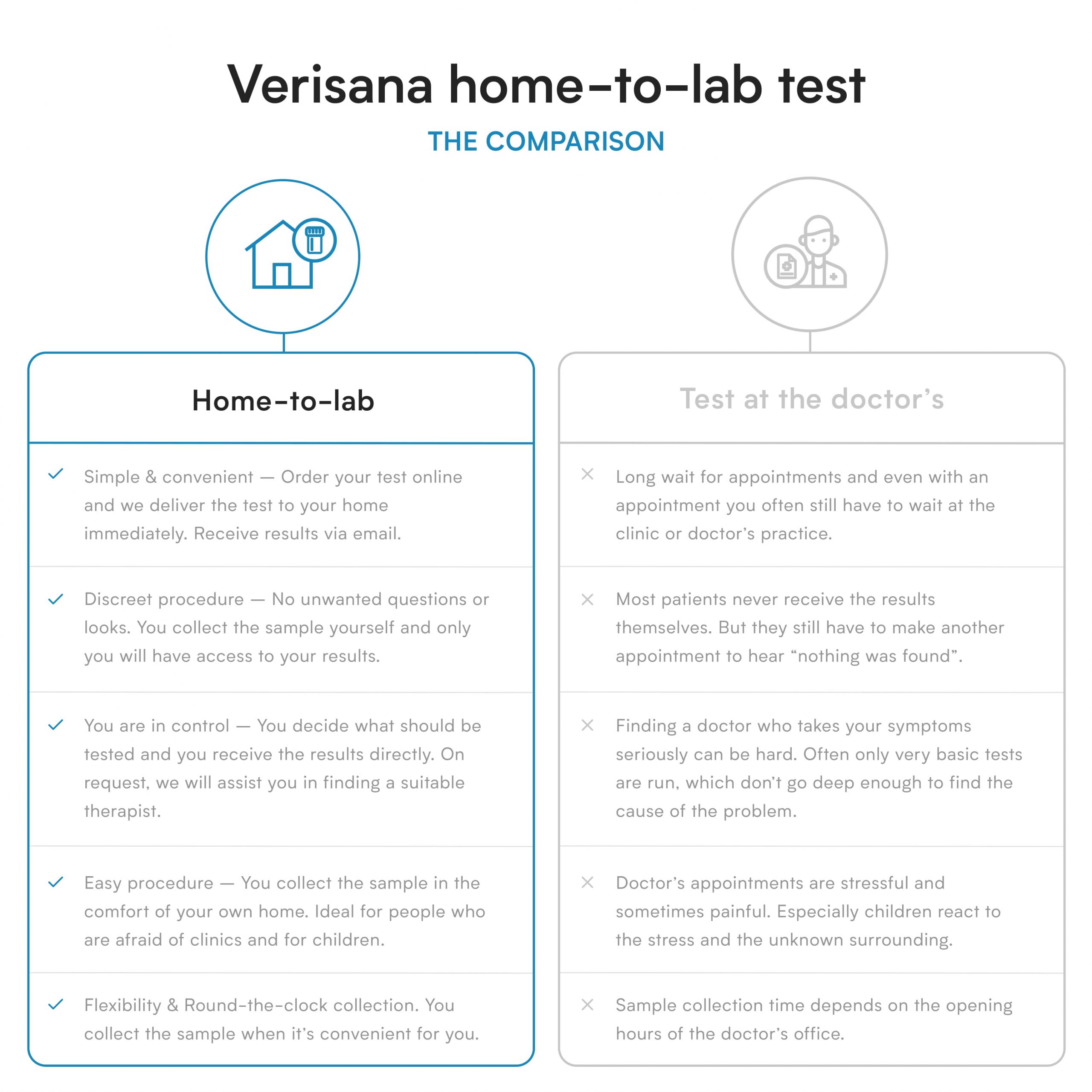 Infertility can involve both physical and hormonal dysfunctions. The goal of our Women’s Fertility Test is to measure your key fertility hormones and find out if there are any hormonal disorders, which might reduce your fertility.

If you are looking to start a family and want to check your hormone levels, or if you have irregular periods and wonder if this might be caused by hormonal imbalances, this test can give you first hints to further discuss with your physician.

This test is right for you if:

After ordering, you receive the test kit with everything you need. You take the samples conveniently in the comfort of your own home and send them back and your sample will be analyzed at a CLIA-certified lab. After the analysis, you can download your results conveniently through our secure Verisana portal.

After the analysis was conducted, you will receive a lab report with explanations about the analyzed markers as well as information about possible symptoms that can occur when there is an imbalance. Further to that, we always recommend the discussion of the mailed results with your doctor or practitioner.

Although we do not offer medical advice ourselves, we will gladly assist you in finding a suitable therapist in your area. Besides, further information is available on our website, especially in the different test categories, under “health conditions” and the FAQs. Still have questions? Then you can contact us by writing an email to contact@verisana.com.

Samples for our tests are collected in the privacy of your own home. We and our partner laboratories (who may be contracted by us to conduct some or all analyses of your test) take customer privacy very seriously. Only you will have access to this information and we will not share your information with any not authorized third party. All samples are disposed of following analysis.

For the Women's Fertility Test we analyze:

Estradiol (E2) is the most effective estrogen of the estrogen hormone family and is the female fertility hormone. It influences the maturation of the follicles and acts mainly as a growth hormone for the reproductive structures in females. The amount of estrogen produced depends on the phase of the menstrual cycle. When the ovaries are functioning well, estradiol levels are relatively low around day three of the menstrual cycle and are therefore referred to as baseline estradiol levels.
Estradiol is not considered a marker for ovarian reserve but serves only to interpret FSH levels. A normal estradiol with a normal FSH indicate normal ovarian reserve (egg quality and quantity) and normal age-related fertility potential. Since high estradiol levels can artificially suppress FSH levels, it is important to test not just FSH, but also estradiol with it. High estradiol with a normal or elevated serum FSH might be a sign that ovarian reserve is diminished, thus reducing a woman’s ability to get pregnant.
Abnormally high estradiol levels in women who are not pregnant may be a sign of a possible underlying health problem. It might indicate endometriosis or reduced occurrence of ovulation.
Extremely low or no detectable estradiol levels can cause a range of symptoms like vaginal dryness, headaches, lowered libido, and reduced bone density.

LH (Luteinizing Hormone) is a hormone produced by pituitary gland and helps the reproductive system in both men and women. It plays a role in puberty, menstruation, and fertility. In women, LH levels change with age and throughout the menstrual cycle. There is a sudden increase between the 12th and 14th day of the menstrual cycle that triggers ovulation. A normal value usually means that there is enough estradiol and progesterone available and that the ovaries are not yet restricted in their function. An increased FSH level in combination with a normal LH level can, however, also occur during the menopause and shows that the ovaries still have residual function.
Slightly elevated levels of LH, alongside elevated FSH levels, suggest impaired ovarian reserve (poor egg quantity and quality) that accompanies chronological aging and might predict a lower chance for a successful pregnancy. Abnormally high levels of LH during nonovulatory times or persistently high levels can indicate that you have entered menopause. During menopause, the LH value rises to five times, but it can be subject to strong fluctuations. After menopause, the LH level remains slightly elevated.

FSH is a hormone associated with the reproductive system both in men and women. In women, it is responsible for growth and maturation of ovarian follicles, which produce estrogens and progesterone to maintain a normal menstrual cycle. Since estradiol levels on day 3 on the menstrual cycle naturally suppress FSH, relatively low levels within normal range in in conjunction with normal day 3 estradiol indicate normal ovarian reserve (egg quality and quantity) and normal age-related fertility potential.
In contrast, slightly elevated levels of FSH, alongside elevated LH levels, suggest impaired ovarian reserve (poor egg quantity and quality) that accompanies chronological aging and might predict a lower chance for a successful pregnancy. In women with naturally declining ovarian reserve and a reduction in function of the ovaries elevated FSH usually also stimulate higher estradiol levels. In premenopausal age elevated FSH alongside elevated estradiol might also be suspicious for functional cysts that do not affect fertility and mostly naturally go away on their own.
Marginally elevated FSH levels can also be caused by stress or by being underweight.

Thyroid Stimulating Hormone (TSH) is a hormone produced by the pituitary gland in the brain that controls thyroid hormone production. Thyroid hormones are crucial for regulating metabolism, energy production and play a big part in fertility and pregnancy. Normal TSH levels generally indicate a normally functioning thyroid gland that does not interfere with a woman’s ability to get pregnant.

The hormone prolactin is formed in the front part of the pituitary gland and reaches its place of action via the blood system. This is primarily the female mammary gland: prolactin promotes its growth and, after childbirth, the production and secretion of breast milk. In addition, during pregnancy and breastfeeding, prolactin inhibits the menstrual cycle by preventing the release of various other hormones.
Prolactin levels are rarely decreased. The reason can be a dysfunction of the pituitary gland or the use of medications that lower prolactin. In most cases, a low prolactin level isn’t a problem. If a functional weakness of the pituitary gland can be ruled out as the cause, usually the doctor will just continue to check the prolactin level regularly. The doctor will also check whether any medication you may have been taking is responsible for the low levels.
Possible causes for an increased prolactin level (Hyperprolactinemia) can be:

But high prolactin levels can also be caused by other things like pregnancy and breastfeeding, but also physical or emotional stress.

This test is right for you if:

There are no reviews yet.

The test kit includes everything you need: a sample instruction, sample collection components and a bag for free return shipment. The scientific analysis by a CLIA-certified lab and laboratory report via secure web portal is included in price.

When do I have to do the test?

Once you get your test kit, take the sample on the 3rd day of your menstrual cycle, and send it back to our CLIA certified lab via the prepaid shipping envelope included in the kit.

When does a cycle start?

By definition, the menstrual cycle begins with the first day of bleeding.

How do I know when I am ovulating?

You can determine the right time using various methods, such as the cervical mucus. But it also works mathematically: First determine the average cycle length of your last 3 cycles. Let's say your last 3 cycles were 26, 28 and 30 days long, then the average cycle length is 28 days. Ovulation usually occurs 14 days before your next period. That means in this example, the expected ovulation falls on day 14 (28-14).

Why are so many individual tests necessary for fertility testing?

Fertility is a very complex system. The probability of getting pregnant depends on many different factors and many hormones are involved in the process. Therefore, it is important to examine a cycle as a whole, if possible, in order to detect all possible weak points.