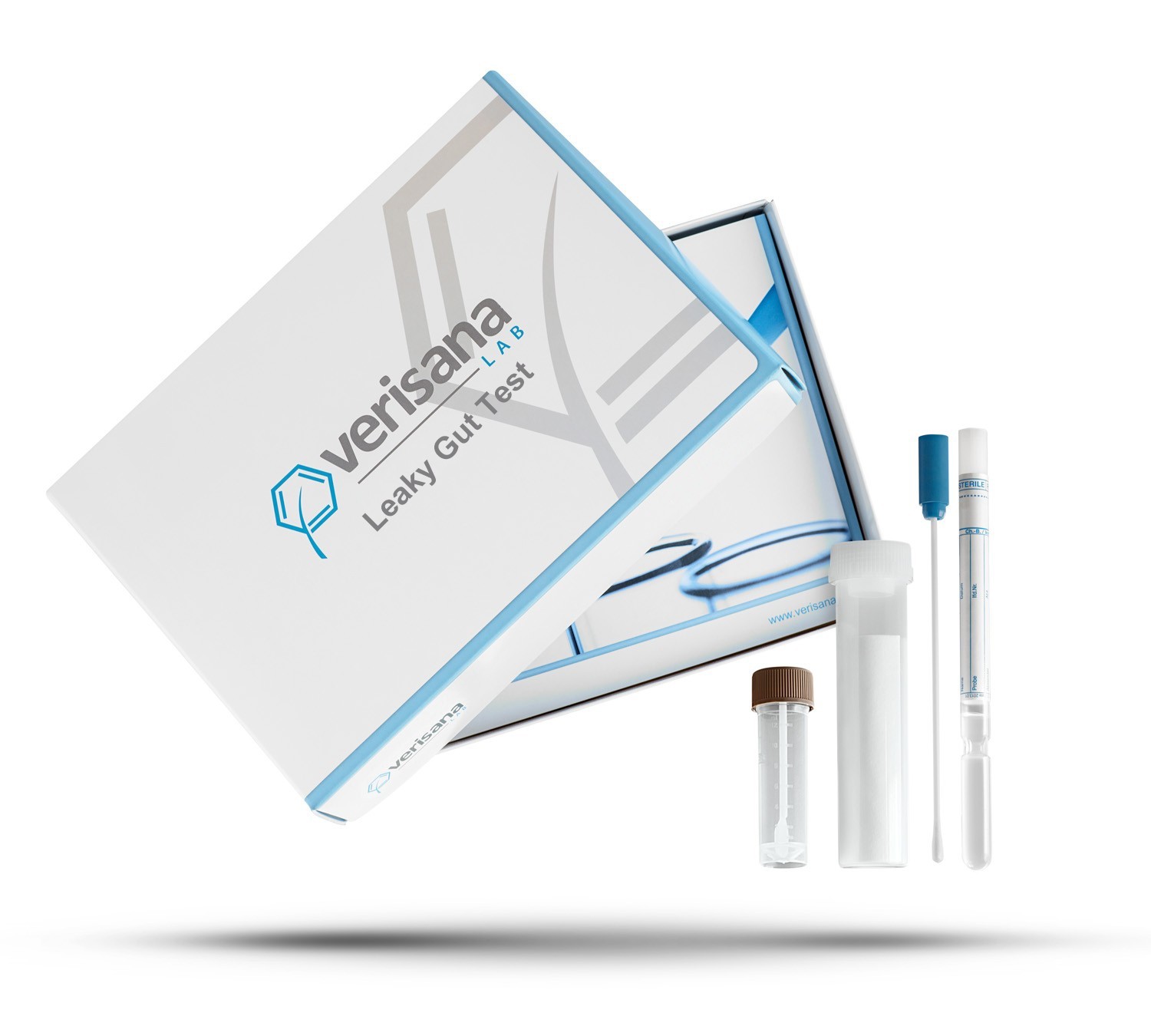 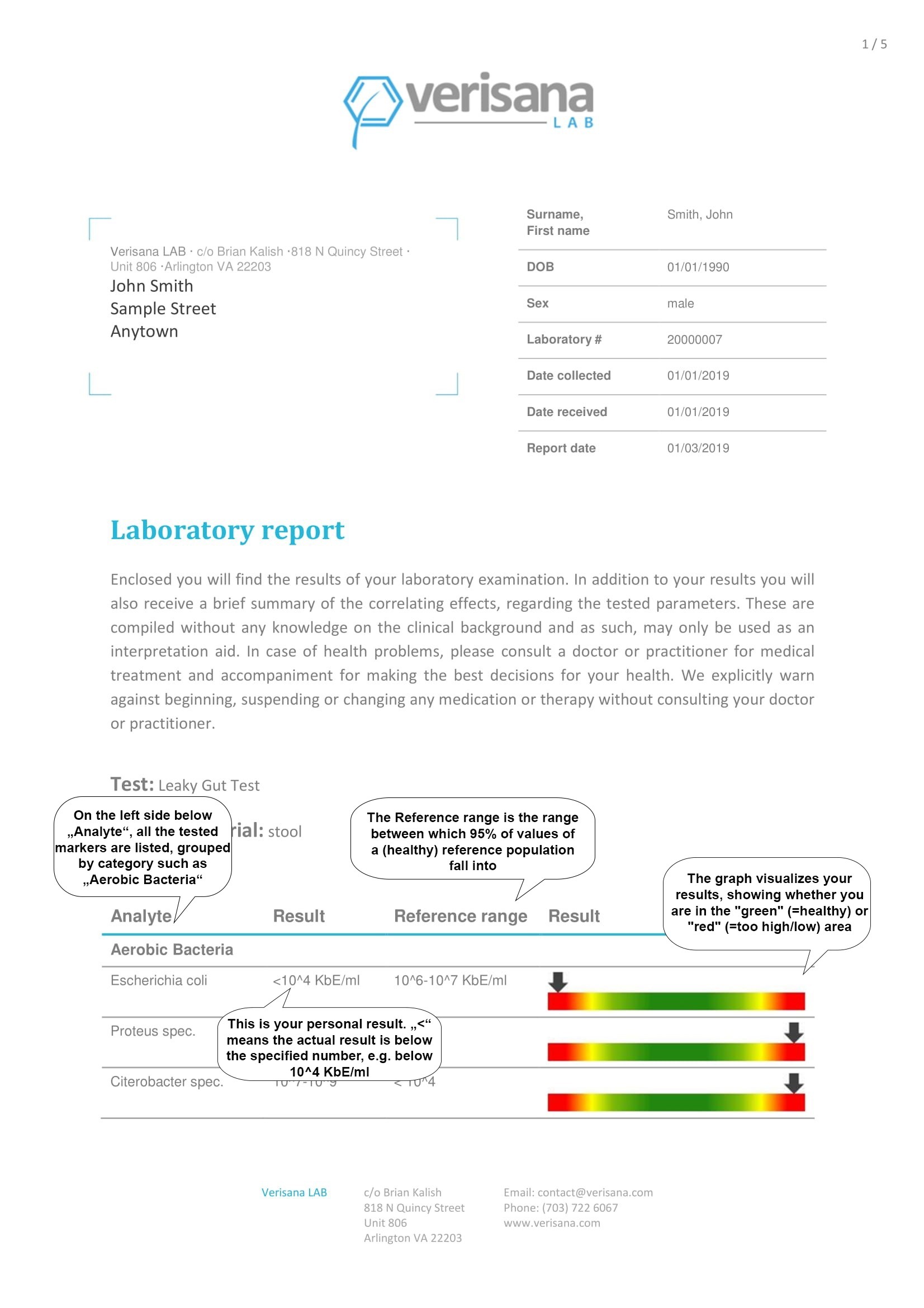 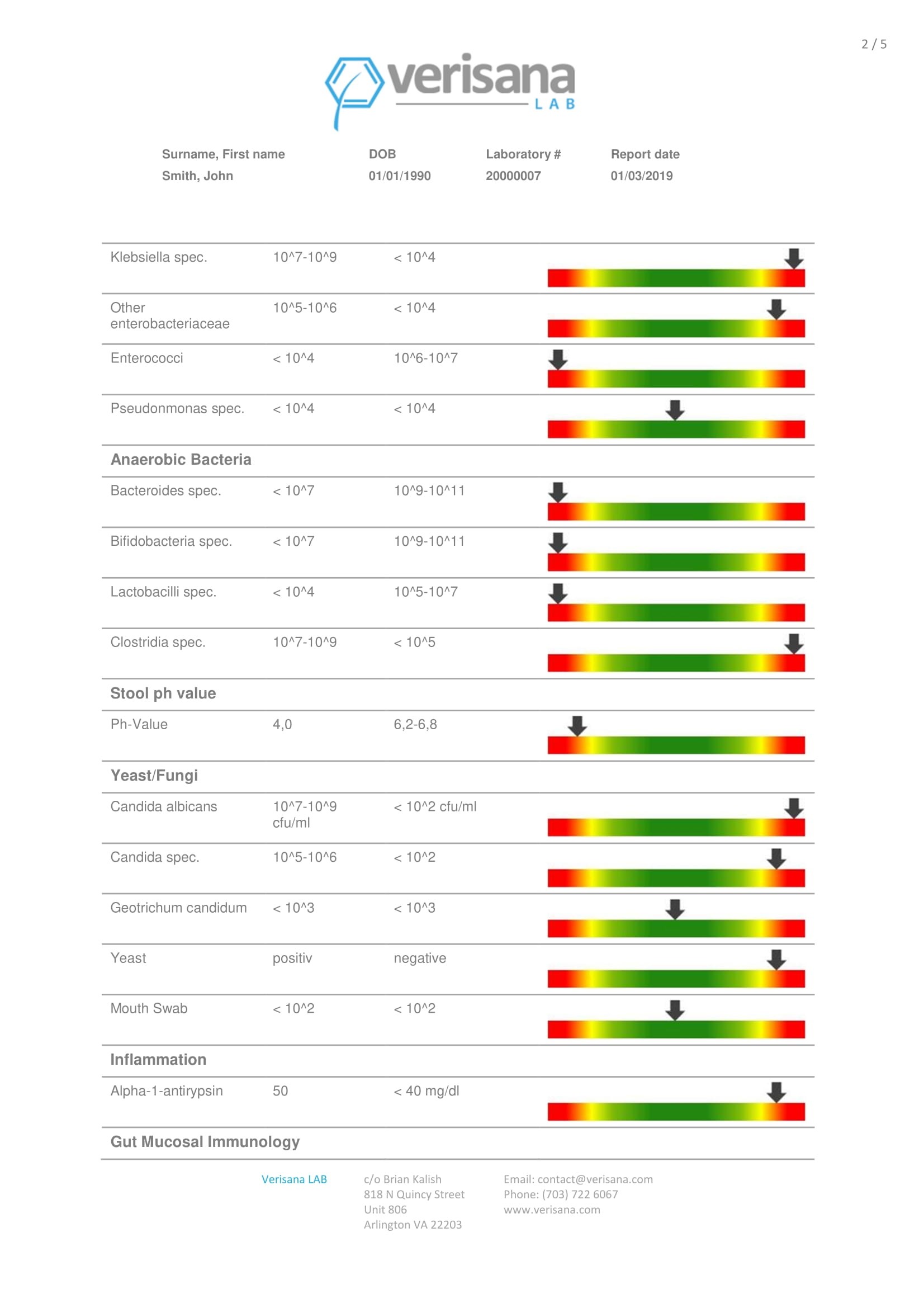 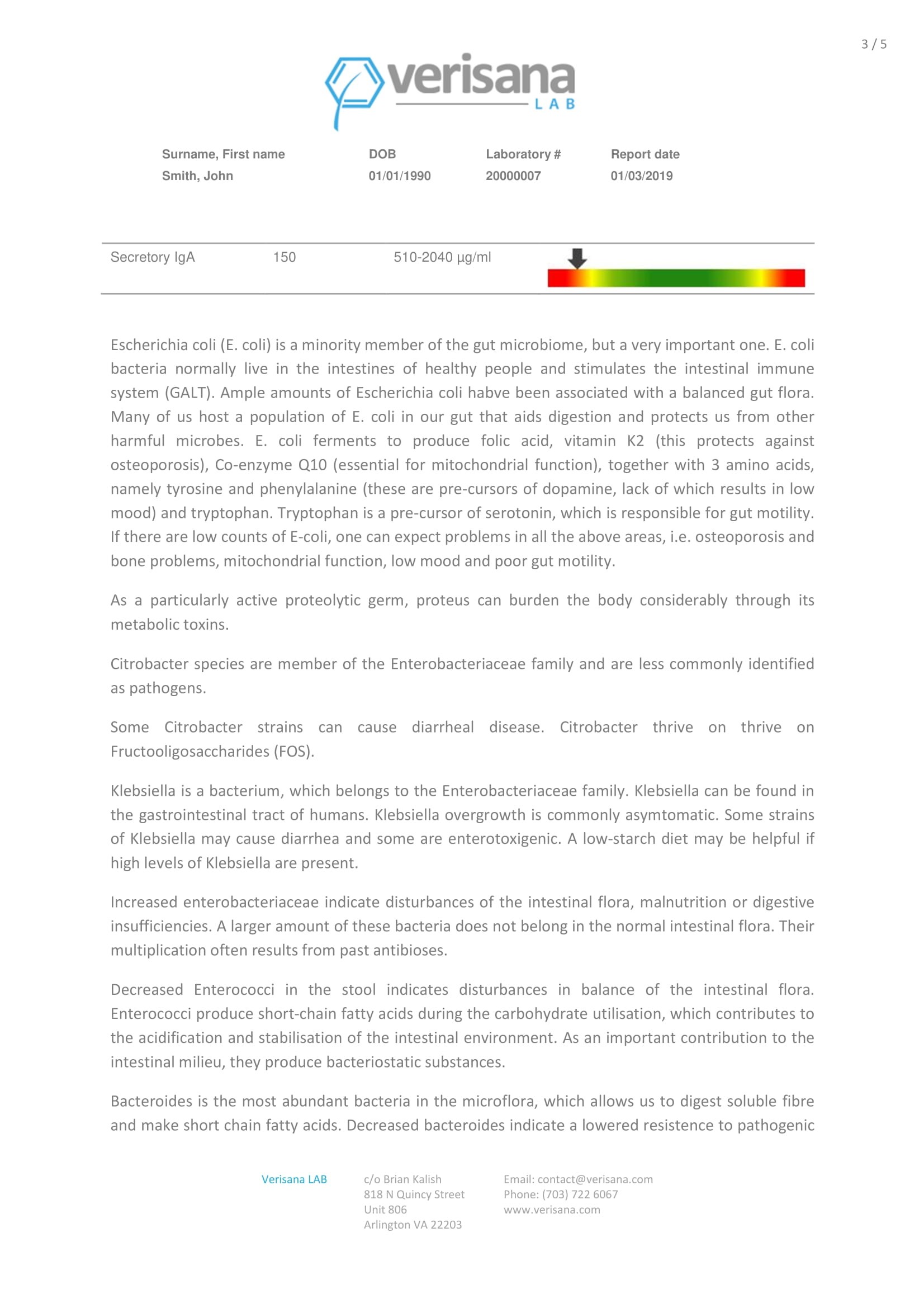 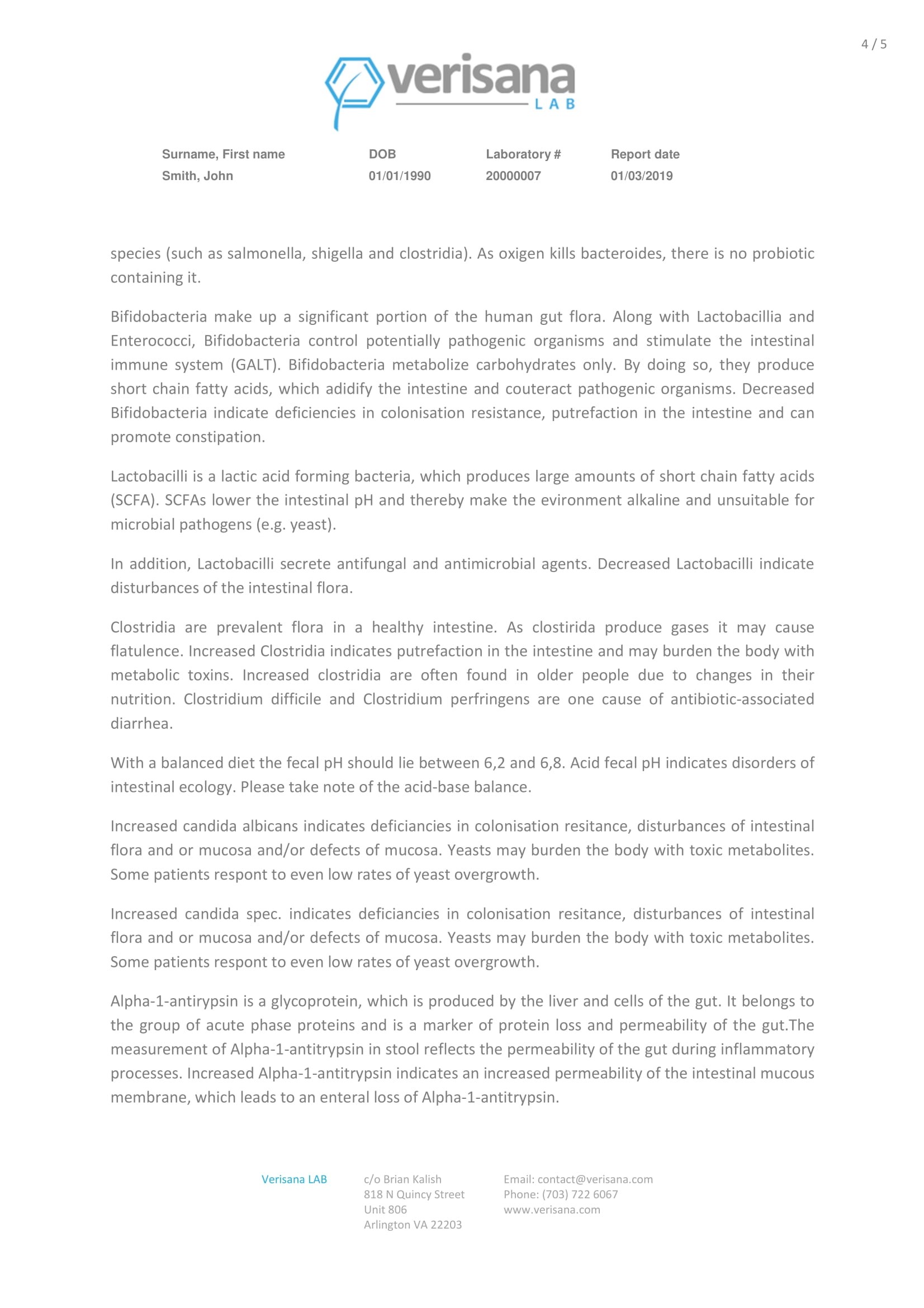 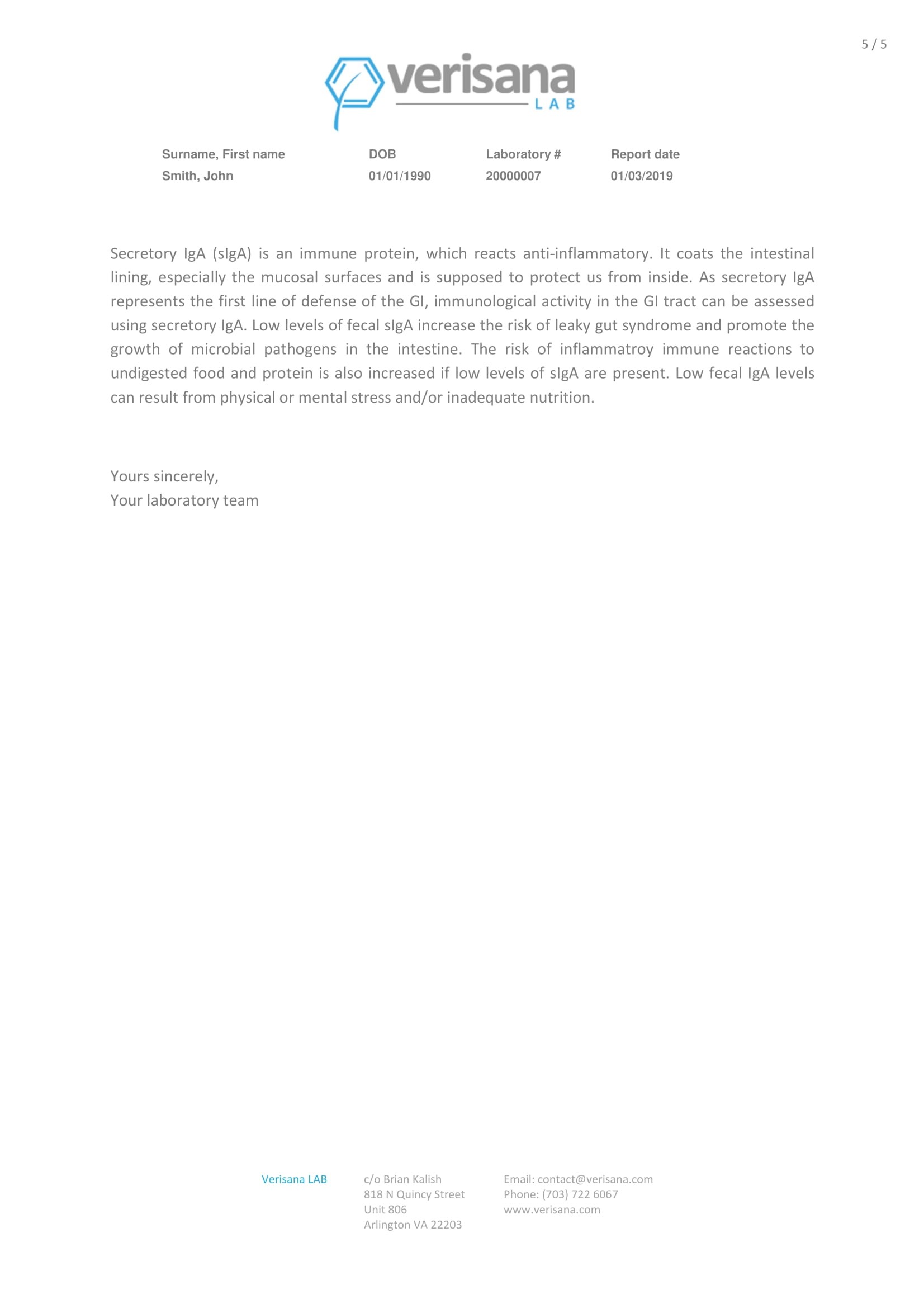 With the Leaky Gut Test, you receive an extensive examination of your intestine based on your stool sample:

In the leaky gut syndrome the intestinal mucosa becomes permeable – The immune system reacts with inflammatory and allergic processes.

Our Leaky Gut Test gives you information about the condition of your intestinal mucosa as an impermeable gut is necessary for your general health and well-being.

Your results will provide detailed information about whether your escherichia coli, proteus, citrobacter, klebsiella, other enterobacteriaceae, enterococci, pseudomonas, bacteroides, bifidobacteria, lactobacilli, clostridia, pH-Value, candida albicans, candida spec., geotrichum candidum, yeast, alpha-1-Antitrypsin and secretory IgA levels are normal, low, or high compared to reference ranges in your age group. You can then discuss the results with your doctor or health practitioner, who can give you further guidance and treatment recommendations.

We always recommend the discussion of the mailed results with your doctor or practitioner. Although we do not offer therapy service ourselves, we will gladly assist you in finding a suitable therapist in your area. Besides, further information is available on our website, especially in the different test categories, under “health conditions” and the FAQs. Still have questions? Then you can contact us by phone at (703) 722 6067 (08:00am – 11:30am EST) or mail at contact@verisana.com.

For the Leaky Gut Test we analyse:

Escherichia coli (E. coli) is a minority member of the gut microbiome, but a very important one. E. coli bacteria normally live in the intestines of healthy people and stimulates the intestinal immune system. It aids digestion and protects us from other harmful microbes. E. coli ferments to produce folic acid, vitamin K2 (this protects against osteoporosis) and Co-enzyme Q10 (essential for mitochondrial function). If there are low counts of E-coli, one can expect problems like osteoporosis and bone problems, mitochondrial function, low mood and poor gut motility. Increased E. coli indicates putrefaction in the intestine and may burden the body with metabolic toxins. Potential causes may be reduced immunity of the intestinal mucosa, low counts of bifidobacteria or excess supply of protein.

Increased enterobacteriaceae indicate disturbances of the intestinal flora, malnutrition or digestive insufficiencies. A larger amount of these bacteria does not belong in the normal intestinal flora. Their multiplication often results from past antibioses.

Fecal pH is influenced by numerous factors, but is largely dependet on the fermentation of fiber by the beneficial flora of the gut. With a balanced diet the fecal pH should lie between 6,2 and 6,8. Acid fecal pH indicates disorders of intestinal ecology. An alkaline fecal pH indicated an imbalanced intestine flora. It is possible that proteolytic putrefactive germs are predominant, which raise the fecal pH through alkaline metabolites (e.g. due to a high-protein diet).

Geotrichum candidum belongs to the Endomyceteaceae family. This organism can be found in soil, dairy products and in human skin and mucosae. Symptoms of Geotrichum infection have been associated with diarrhea and enteritis.

An infection with yeasts can have many reasons. Possible causes are things like corticosteroid therapy, stress, diabetes, malnutrition or birth control pills. All of them weaken the immune system and a weakened immune system cannot control yeast or help you get rid of it. Antibiotics are also a common cause of yeast infection because they destroy the good bacteria that keep it under control.

Symptoms the Leaky Gut Test is suitable for:

Below you will find the sample report for the Leaky Gut Test.

The intestinal mucosa forms a natural barrier. It absorbs nutrients from food, but keeps harmful substances away. If the intestinal mucosa is damaged, it can no longer perform this task. In addition nutrients, toxins, metabolic products, etc. then penetrate directly into the organism and can cause various kinds of complaints.

What factors can damage your intestinal mucosa?

Possible causes of a permeable intestine include taking antibiotics or cortisone, pathogens (e.g. fungi and viruses), an unbalanced diet (too much sugar, white carbohydrates, soft drinks), chemotherapy or heavy metals.

Why is the intestinal flora also checked during the Leaky Gut test?

The intestine is a complex system in which all parts interact with each other. Often, imbalances in the bacterial balance or a fungal infection are the real cause behind the permeable mucosa. The harmful metabolic products attack the mucous membrane and damage it. A comprehensive testing should therefore always be carried out in order to include all factors.

Any cookies that may not be particularly necessary for the website to function and is used specifically to collect user personal data via analytics, ads, other embedded contents are termed as non-necessary cookies. It is mandatory to procure user consent prior to running these cookies on your website.