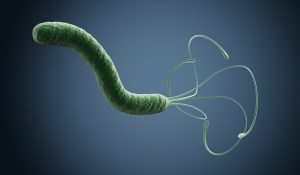 A little bit of nausea or feeling a little unwell in the stomach? Everyone has these kind of symptoms sometimes. However, if these symptoms occur on a regular basis, the bacterium Helicobacter pylori might be the reason. It nests in the gastric mucosa and irritates it. As a result, diseases such as gastrointestinal ulcers can occur.

What is Helicobacter pylori and what are the symptoms?

Helicobacter pylori is a rod-shaped bacterium. It passes through the mouth into the body and into the stomach, where it colonizes the gastric mucosa.

It causes symptoms such as heartburn, nausea, flatulence or stomach ache. Unlike most other bacteria, it can survive the acidic environment in the human stomach.

What long term consequences can come from a H pylori infection?

The bacteria can be the cause of various diseases in the gastrointestinal area:

How is Helicobacter pylori detected?

There are several ways to detect Helicobacter pylori. The diagnosis is usually done by a gastroscopy with removal of a tissue sample from the gastric mucosa. But a simple stool examination can determine the bacterium just as reliably.

In a stool examination, certain antigens in the stool can be detected, which provide evidence of an infection with this germ. The test belongs to the gold standard of Helicobacter pylori diagnostics.

What can I do against an infection with H Pylori?

The common treatment of Helicobacter infections is antibiotics, which can havw numerous side effects. However, studies have shown that sulforaphane may also be suitable for naturally controlling Helicobacter pylori. Therefore, this remedy is now also used by numerous therapists.

Sulforaphane can be found as a food supplement, often in form of broccoli extract, since broccoli and broccoli sprouts have one of the highest known levels of sulforaphane.