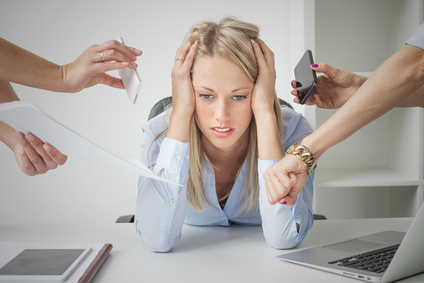 Are you exhausted and irritated?

These are some of the symptoms relating to a cortisol deficiency. Verisana measures your cortisol levels and determines whether your levels are too high or too low regarding the normal standard.

Cortisol is the most important stress hormone besides adrenaline: Stress hormones help the body to react to particular strain. They release energy reserves in order to prepare the body for “escape” or “attack”. During hard, physical work, competitive sports, psychological, physical and mental stress situations, or during a severe illness, the distribution of cortisol is also stimulated. Cortisol is primarily produced in the adrenal cortex. Between six o’clock and eight o’clock in the morning the levels are normally the highest, which is why the body wakes up at this time. During the day the cortisol level decreases, so the body can slowly come to rest in the evenings. Between twelve o’clock and four o’clock at night, the levels are normally the lowest – if the levels are too high at this time, it can often cause a sleeping disorder.

Cortisol plays an important role in the different metabolic processes in the body. Through its increased distribution in stress situations, it is able to provide energy by consuming sugar, fat and protein reserves. In immune processes, cortisol also helps with its anti-inflammatory and anti-allergic effect, and has an important function in maintaining the health of the body.

However: Both too low and too high levels can cause unpleasant symptoms.

It is well known that chronic stress is unhealthy – and stress is, in turn, the most important impulse that causes the increase of the distribution of cortisol. If the cortisol levels are too high, symptoms can include immunodeficiency, depression, physical exhaustion, metabolic disorders, diabetes, obesity and sleeping disorders. Excessively high cortisol levels can indeed cause unpleasant symptoms.

Just the same, excessively low cortisol levels can interfere with general well-being: Cortisol is vital. Apart from the provision of energy reserves, it also plays a role in the cardiovascular health,gastrointestinal health, the immune system and brain functions. Chronically low cortisol levels should therefore be treated medically. A low cortisol level can also be an indication of an infection in the adrenal cortex, a deficiency of the adrenal glands or adrenal fatigue; as it is produced in that area. A dysfunction of the pituitary gland can also be the cause for a low cortisol level, as the hormone ACTH is distributed there, which gives the adrenal cortex the impulse to distribute cortisol. It is advisable to have your cortisol levels tested, especially if you are quickly exhausted and suffer from fatigue, but also if you are generally experiencing unexplained health problems.

Burnout describes the condition of prolonged, emotional exhaustion as a reaction to chronic stress – people who are affected feel “burnt out”. In today’s performance-orientated society, burnout is no longer a rarity. Every day work can, for some people, ensure continuous stress which, in the beginning, leads to an intensive phase of cortisol distribution. However, if this phase drags on, the chronic stress can lead to the exhaustion of the adrenal cortex causing it to produce less cortisol – leading to a cortisol deficiency. At first, only the morning cortisol levels are reduced, but over time the cortisol levels fall below the standard levels. If you are suffering from burnout, it is necessary that you talk to your doctor.

The right amount of cortisol is also beneficial for general health and well-being. With Verisana you can measure your morning cortisol levels, as well as your levels during the day, simply by using a saliva test. This means that more than one sample is to be taken at different times of the day in order to determine at which times your cortisol levels are at their highest and lowest. The samples needed can be easily obtained by yourself at home. The evaluation report is then sent per post along with: